The study of historical routes connecting places is a crucial aspect to enabling a better understanding of the structure, performance and evolution of past and present transport systems around the world. Routes can be documented from their collection in historical sources, such as itineraries and inscriptions in Roman Era, books of pilgrimages in medieval times or drawn maps in more modern times.

However, the study of historical routes is currently faced with a crucial issue: there is an increasing gap between our rapidly increasing knowledge about the physical connections between places and the research community’s ability to access and aggregate this mass of information to improve our understanding of the past and present flows of people, goods and ideas these systems facilitate. By building on the Pelagios platform and community, and on the recent growth in the scholarly practice of linked open data, this project will overcome this challenge.

Itiner-e will develop the first online gazetteer of historical roads, to enhance our ability to collect, aggregate and debate historical roads, and to enable the linking of this important source of information about past societies with other resources by linking related places. This proposal concerns a resource development that aims to develop a pipeline methodology for linked open road data, set up an online platform and implement the method using the Roman routes in the Iberian Peninsula as a proof-of-concept.

The pipeline method for linked open road data and the creation of the gazetteer will be tested through a model focused on the Roman Roads of the Iberian Peninsula. This case was selected due to the diversity and richness of the resources as well as the availability of the most up-to-date knowledge on these routes through the Mercator-e project led by Pau de Soto. In these territories we can find different Roman roads attested in ancient written and depicted sources such as the Vicarello Cups, the Itinerarium Antonini Augusti, and the Tabula Peutingeriana. The Mercator-e project additionally collected all archaeological and historical traces of all route segments to create the most accurate and up-to-date digital resource of physical routes in the Roman Iberian Peninsula. However, this dataset is not currently linked open data.

Through the Itiner-e gazetteer and the places associated with routes, this data resource will be linked with other Gazetteer projects such as Pleiades (https://pleiades.stoa.org/) and the TIR-FOR Project (https://tir-for.iec.cat/the-map/). All the data generated will be stored in GeoJson format where all the information will be stored (id names, places within the roads, chronology, etc…)

This project is conceived as a continuation of the Mercator-e Project, the actual project of the lead applicant, Pau de Soto. After storing and digitising all the available information about the historical roads of the Iberian Peninsula, an appropriate next step is to create new ways to share some of the newly produced data. At the same time, this project is conceived as a seed of a bigger project which will be focused in the creation of a digital resource of all the roads of the Roman Empire. The main roads of this future project will be uploaded to Itiner-e. Hence the proof-of-concept nature of this proposal. The final result of Itiner-e will be the creation of the biggest Historical Road Gazetteer where scholars and other audiences will benefit from this online resource.

From now on, after testing this methodology in a small territory, all the historical roads of the Iberian Peninsula recorded in historical sources will be uploaded into the system. The collaboration within the Institute for Catalan Studies and within the TIR-FOR project assures the continuity of the project and its maintenance online. In a future step, an open tool will be created to allow other researchers to easily upload their own roads and information.

All the information and code produced within this project will be hosted on Github and released under CC licenses.

The beneficiaries of this project will be researchers interested in historical places and roads. At the same time, the Open Data community will be benefited with this tool as they could link their project and information not only to some places but also to bigger entities, as in this case, big roads.

PhD in Classical Archaeology (2010) from the Autonomous University of Barcelona (UAB). He is specialized in the use of GIS and Network Analysis to analyse the Roman transportation and communication routes. He also obtained an MSc. in Geographical Information Technologies (2012) from the Autonomous University of Barcelona (UAB). After his PhD, he has been involved in projects at several international research centers and universities in Catalonia, Spain, England, Italy and Portugal.  He is also specialized in the development of non-intrusive techniques, mainly geophysics applied to Archaeology. Since October 2016, he is working as a Marie Curie Fellow at the Universidade Nova de Lisboa developing a project about the evolution of the transportation networks in the Iberian Peninsula from Roman times to the XIXth Century.

Tom Brughmans is an archaeologist specialised in studying the Roman economy through ceramic data analysis, computational simulation modeling and network science. He is currently a postdoctoral researcher at the University of Oxford’s School of Archaeology where he leads the Leverhulme-funded project MERCURY, affiliated with the Oxford Roman Economy Project. He previously held a postdoctoral position at the computer science department in Konstanz where he developed original computational GIS methods for studying visibility phenomena in landscape archaeology. Tom holds a PhD and MSc in Roman archaeology through computational methods and Roman tableware studies (University of Southampton), and an MA and BA in Archaeology (KU Leuven).

He is chairman of Archaeology at the Autonomous University of Barcelona and member of the Institute for Catalan Studies. He was director of the Badalona Museum between 1975 and 1980. He has held various positions in the Generalitat of Catalonia: he has served as Head of the Museum Service (1980-82), Deputy Director of Museums, Plastic Arts and Archeology (1982-84), Subdirector General of Universities (1987-90) and director of this last section (1990-93), he has also been director of the Catalan Institute of Classical Archeology (2003-2007). In the field of research, he has worked on various aspects of Roman archaeology in Catalonia, including excavations and studies about the Roman cities of Baetulo (Badalona) and Iesso (Guissona) and the edition of Sheet K/J-31 of the Tabula Imperii Romani, commission that he presides since 2014. His knowledge about Iberian Roman archaeology is an added value to this project. He is a delegate of the IEC in the International Academic Union (UAI) and vice president of the UAI since 2013. He has been appointed an elected member of the Royal Catalan Academy of Fine Arts of Sant Jordi (2008). 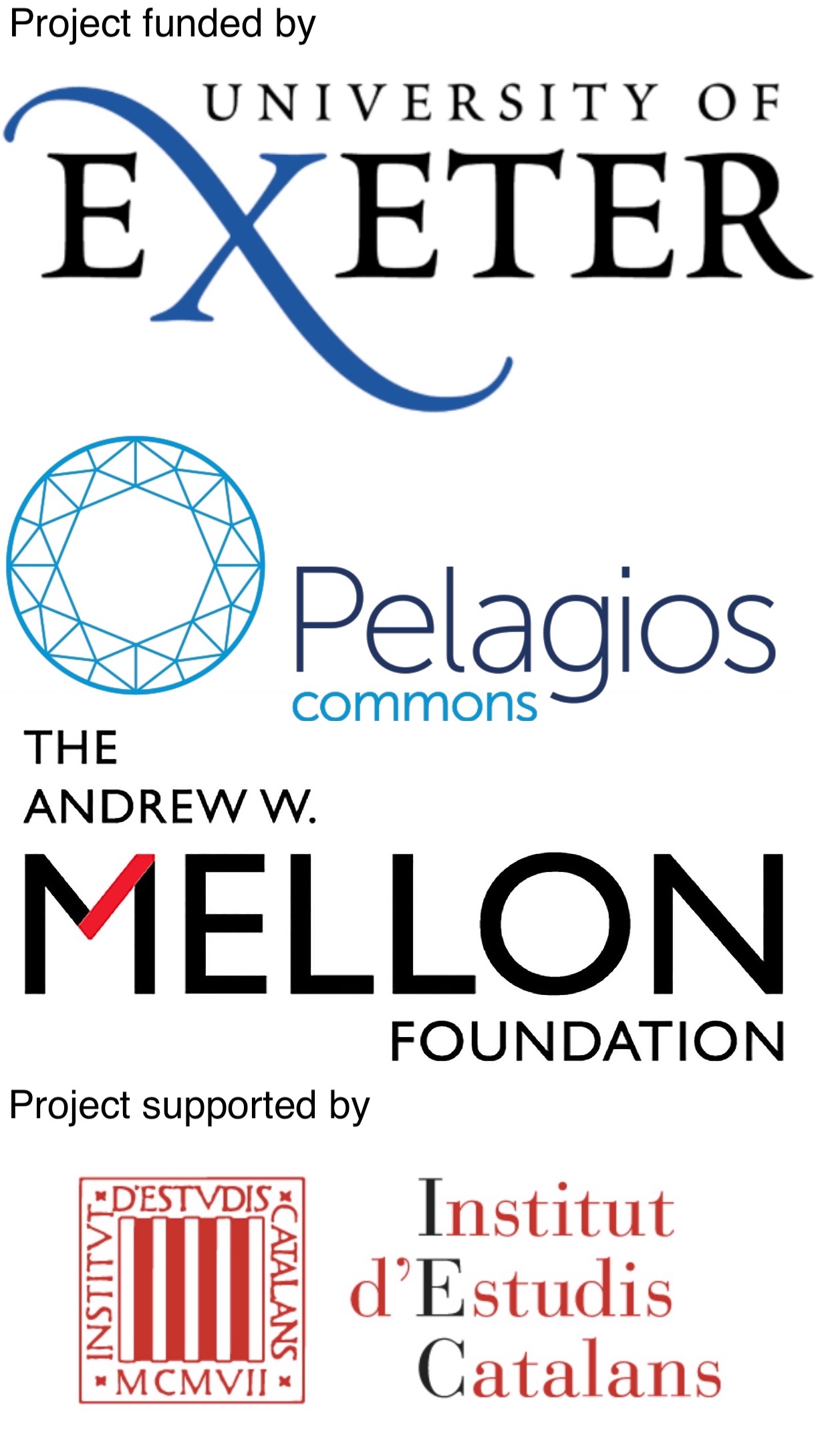 The Itiner-e project is hosted by The Institute of Catalan Studies (IEC) and has received fundings from a Pelagios Commons Resource Development Grant. Pelagios Commons is a long term project funded by the Andrew W. Mellon Foundation (NY) and developed under the auspices of the University of Exeter.

IEC is a centenary institution which hosts part of the scientific society and scholars of Catalonia, which configures the role of an institution with a clear impact on the scientific society. The Institute of Catalan Studies is structured in five sections, established according to large thematic units, which organise the research. The Institute has a staff of more than one hundred people and has about 250 permanent and emeritus members. The Historic-Archaeological Section research includes history, archaeology, history of art, the history of law and the history of literature, mainly focused on the study of the territories of Catalan language, but also participating in international research programs and projects.

This wide time scope has allowed its researchers to initiate or collaborate in a large volume of prestigious research projects with strong international repercussions. Some of the most prominent projects where members of this section participate are: Corpus Inscriptionum Latinarum (CIL), Corpus International des Timbres Amphoriques (CITA), Catalunya Carolingia, Corpus des Troubadours or Tabula Imperii Romani-Form Orbis Romani project (TIR-FOR). The international vocation and excellence of this section has been continuously strengthened thanks to the various international collaborations.